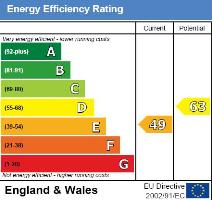 As Elmhurst Energy were first to report last Friday, DCLG have produced the first statistical release of Energy Performance Certificates and Display Energy Certificates which gives data on the last quarter (three months to the end of June 2015) and with less detail data for the last year and data since records commenced in 2008.  Elmhurst welcomes the issue of this report which is giving us all a great insight into performance trends and areas for future improvement.

However If you delve into the statistics and beyond what is presented, the picture is significantly worse than you may at first perceive.

The main issue is that the data has been expressed for "Existing dwellings" in total, amalgamating New Dwellings (OCDEA), for which there has been an improvement, with Existing Dwellings to create an "All Dwellings" figure. Subtracting one from the others shows that;

Now, undoubtedly the rise and, more recent, fall in ECO goes some way to  explain this movement but it could also be argued that existing dwelling that were previously "below the radar" are now being assessed and the true quality of our current housing stock is significantly worse than previously reported.

Elmhurst will be writing to DECC to draw their attention to this report, and our understanding of it, and urge them to respond for industry calls to fill the gap left when funding of Green Deal Plans was scrapped last month