The latest version of SBEM (Simplified Building Energy Model) for England, version 6.1, has been released by the Government to support the new building regulations for non-domestic buildings which take effect on 15th June 2022. This significant change will also affect the energy assessment of existing buildings for the purposes of an EPC.

Whilst Elmhurst believe that this is great news for Non-Domestic Energy Assessors as it includes the long awaited update to the carbon factors, it will also change the EPC banding of many commercial buildings...this might need some explaining. Our non-domestic technical support team has spent some time analysing the changes.

Over the past couple of years, the decarbonisation of the national electricity grid has been hot topic on the government's agenda. The UK is transitioning to low carbon electricity with coal power stations being decommissioned and replaced with new low carbon power stations.

Within the new version of SBEM, the carbon factor of electricity has been updated to an improvement of around 73% on the previous 2013 values. This highlights the need to make regular updates to SBEM to ensure that our energy assessments are providing accurate and relevant information to our customers and government.

What does this mean for non-domestic EPCs?

Now to the main event. The part you have all been waiting for. What does this mean for EPCs?

Domestic EPCs are a cost metric, but as the EPC rating for non-domestic buildings is based on the CO2 emissions, any change to the carbon intensity values will impact the predicted carbon emission and hence the EPC banding and the EPC rating. As it has been over 8 years since the industry had a regulations change, that change is sizeable.

We have modelled a number of scenarios and provided some analysis of our findings to demonstrate this change.

14 test projects were calculated using the current version (SBEM v5.6) and converted to the new version, v6.1. No inputs were changed during this process. The changes in EPC ratings are entirely based on using the new version of SBEM v6.1 that will be available for use from 15th June 2022.

Graph 1 shows each project and the difference in each EPC rating and band. We have highlighted the electrically heated projects in green as they have improved and natural gas heated buildings in red as they have worsened.

Graph 2 shows the Building Emissions or BER difference between SBEM versions. This is the kgCO2/m2/year produced by the calculation. You can see significant improvement with every project likely due to the electricity use for lighting. 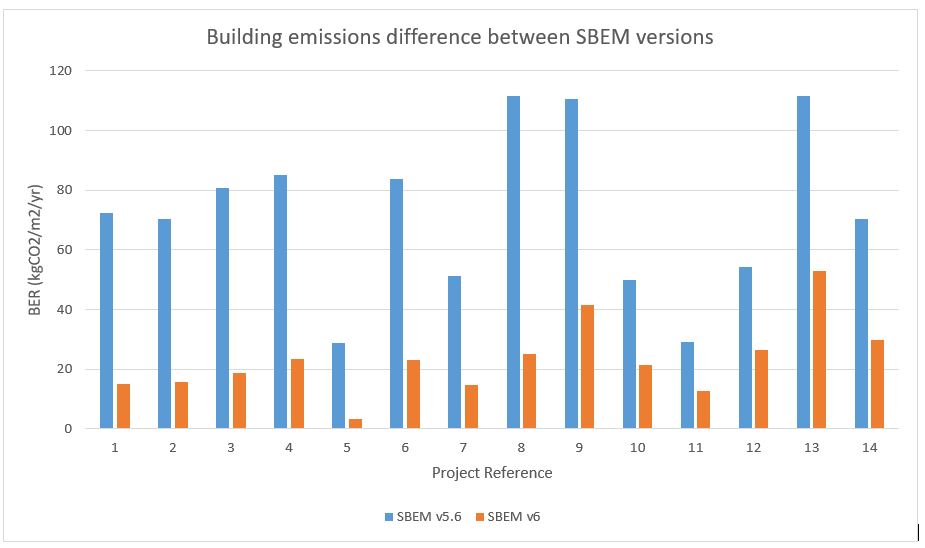 Elmhurst's Head of Operations, Josh Wakeling comments: “Its been a long time coming but we finally have some change to the carbon factors in SBEM. This is great news for our members as it means we will be providing more accurate assessments . From the 15th June 2022 we will see a tidal wave of industry noise and activity with new build compliance and EPCs for England. This is such an important change and monumental impact to the industry. With regards to other regions, Wales and Scotland plan to follow suit with very similar updates later in the the year, where as Northern Ireland will continue to use their existing SBEM until at least 2023. With Elmhurst's support, our members will be best placed to provide the very latest guidance, advice and services the energy assessment industry has to offer”.

SEARCH FOR A NON-DOMESTIC ASSESSOR >