The latest Energy Performance statistics have been issued - “The Good, the Bad and the Ugly!”

MHCLG has released a snapshot of the latest Energy Performance statistics for England and Wales, from April to June 2019. Elmhurst regularly monitors and shares this information through its Market data feature provided within Energy Matters, Elmhurst's quarterly publication. You can take a look at the latest edition here.

Amongst all the statistics and graphs the following table stood out:

For existing homes there appears to be very few ‘A’ and ‘B’ rated homes, and the vast majority are still ‘D’ or below! It is clear that we have some way to go to meet our new ambitions in terms of zero emissions and more energy efficient homes.

In contrast, it appears that the vast majority of new builds are ‘B’ rated. Yet, there remains more ‘C’, ’D’ and ‘E’ rated homes that pass building regulations than those which are ‘A’ rated. This shows the impact of having minimum standards approach to regulations and also the ability to use older regulations (via transition periods). This approach has to stop if we are to meet the ambitions of the country. It must start with the new SAP10 expected next year.

The following table also displays on average the poor performance of our non-domestic buildings: 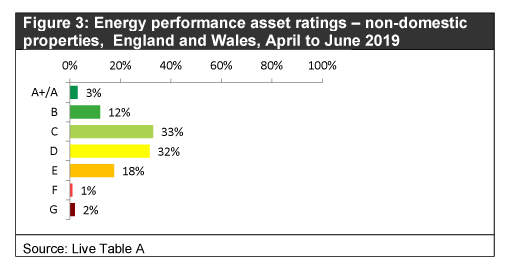 Over the whole of the year ending June 2019,

Stuart Fairlie Technical & Operations Director at Elmhurst states. “We welcome the release of the data for English and Welsh homes and buildings. The growth in existing dwellings is certainly attributed to the private rented sector Minimum Energy Efficiency Standards (MEES) policy and the 10th year anniversary. The country is also building more new homes and Elmhurst analysis which combines Scotland and NI figures puts us on rolling 12 months of 299,000 new builds constructed, which is close to the Government’s target of 300,000 per year. The dip in Non-Domestic EPCs for the last quarter comes predominantly from the diminishing MEES effect, which began earlier in the commercial rental market. The reduction of DECs, is very dissapointing. We believe that this reflects a lack of enforcement or apathy within the market, which is concerning when these buildings should be ‘showing the way forward’. This is something that Elmhurst will be lobbying for in terms of public buildings and showing wider industry leadership and the way forward. Overall, the market is positive, but the statistics indicate that each sector has some way to go to if we are to meet our climate ambitions.”