Dark lofts, cobwebs and creepy critters are all part and parcel of being an energy assessor. But every now and again you'll make some shocking discoveries. Here are our favourites!

A few years ago I did an EPC, all went smoothly until I had to check the loft.

I opened loft hatch and there was no light up there so I shone my torch round and nearly fell off the ladder. Just behind the opened hatch was a full size mannequin, dressed in a full policeman’s uniform but with a ‘Scream’ mask on!

The homeowner was killing herself laughing at the bottom of the ladder. She had decided not to tell me ‘to see if I spotted it’!

Apparently her ex was a policeman and had left some stuff behind, and she thought ’it would be a shame to waste it’.

2. An interesting taste in art

I once went to an apartment where all the art on the walls depicted two women – shall we say ‘with one leg north and the other leg south’. Needless to say it was quite distracting and made for awkward conversation. I didn’t much care for their taste in art...

I came across this monster during an assessment. The photo doesn't do it justice - it was huge! 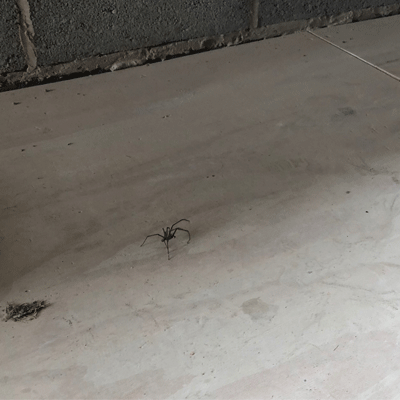 I have been to places that were so dirty I feared that as yet undiscovered diseases were lurking – especially in the bathrooms!

I went to a house in Kettering where there were turds all over the bedroom floor – no idea whether they were human or pets, although no sign of any animals. Yuck.

I was conducting an EPC for this guy and I went into the loft. When I went up the ladder and shone the torch round I got the fright of my life. There, swinging in front of me, was a skeleton hanging from the rafters! It was fake, obviously, but I nearly jumped out my skin. When I went down the ladder the bloke had a knowing smile on his face.

I have spoken to an assessor on the Help Desk who discovered a cannabis-growing enterprise when making a visit. Brings a whole new meaning to evidence capture...